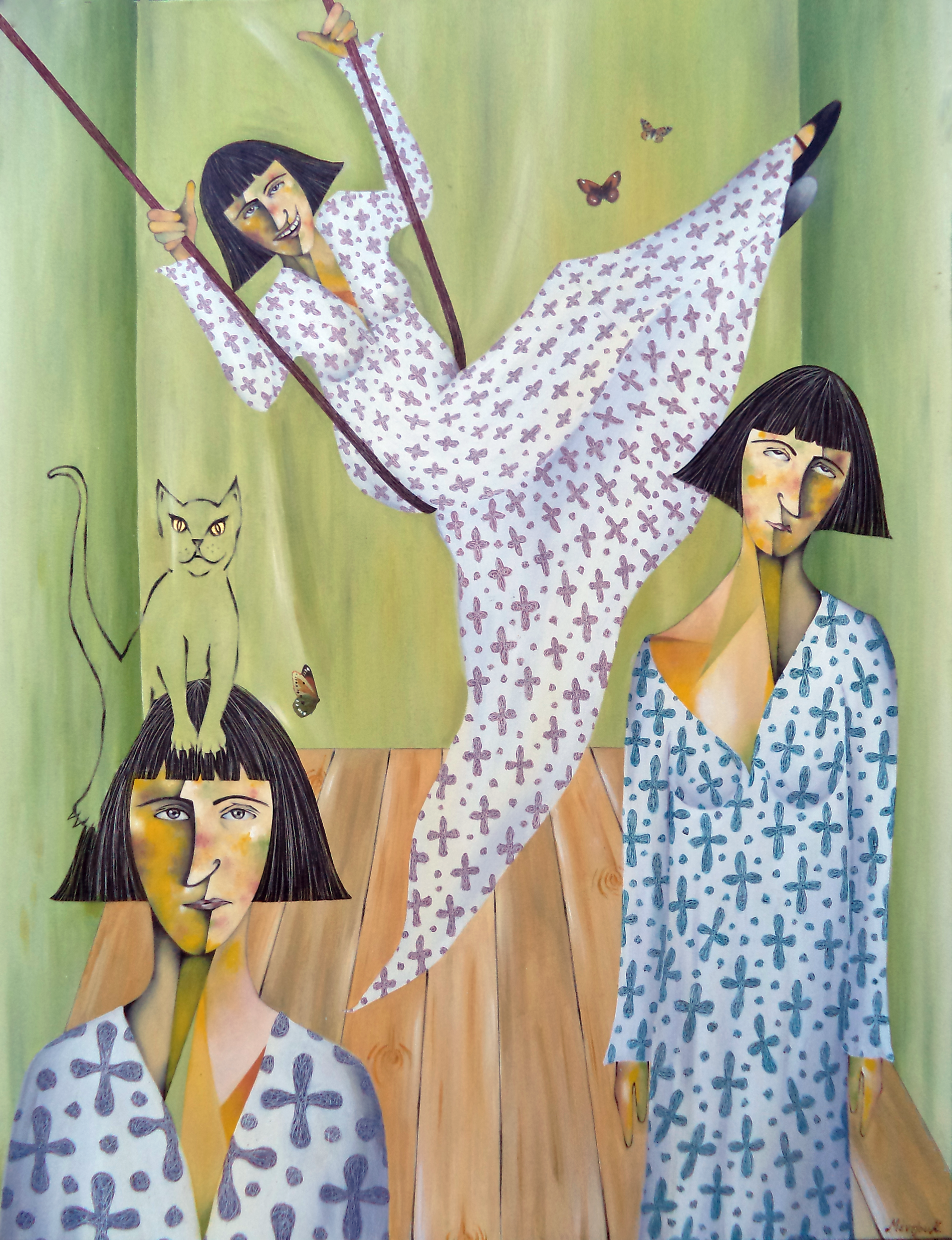 ‘’You are three people and one at the same time. Or perhaps no..
The first one, is happy and simple, she laughs and goes forth and back sat on the swing . (Her teeth are white and strong). She swings, she laughs and she’s tired. The second one, stands in the middle (she always was). She has done something bad and she knows it. Her punishment has all ready started...The third sister, my beloved one, has a cat standing on her head . The whole day, the black cat of death with its golden eyes stands upon her head and scratches with its nails her forehead.
The cat stares at you for hours . The cat, the goddess of fertility and Death .. ‘’

Kelly Mentzou was born in Athens. She studied painting at the Athens School of Fine Arts (at prof. Dimitris Kokkinidis and then prof. I. Valavanidis department), from which she graduated in 2002 with an ΄΄Excellent΄΄degree. During the years from 2000 untill 2002, she also attended the laboratory and theoretical courses of Mosaic, Photography, Psychology and Art Teaching. She has performed three individual painting -mixed technique- exhibitions  and she has participated in many other art exhibitions in Athens, but also in Chalkis and Paros. Since 2003, she has been a member of EETS as well as of the Union of Art Teachers Association.
She lives and works in Athens.

2001 : individual painting exhibition for the presentation of the diploma thesis My work titled: "THE child, Ego" ·

2002 : Participation in a group exhibition entitled "Two thousand two", at the "Factory" of the Athens School of Fine Arts. ·

2003 : Individual painting exhibition titled "I, the child", at the gallery "ATHENS ART SPACE", in Kolonaki. ·

2004 : Iuños : Participation in a group exhibition of art and foreign artists at the "apothiki art GALLERY" of Paros. ·

2004 : December : Participation in a group exhibition of small paintings titled "Small is Smart", in the art space of the Varvakios market, in Athens. ·

2005 : March : Participation in a group exhibition – Bazaar Works of art at the gallery "MARY ALEXIOU", in Kolonaki. ·

2010 :  July : Participation in a group exhibition of painting and photography of E.Lelinon and foreign artists at the Red House in Chalkida. ·

2011-2012: participation in 2 group exhibitions at ATHENS ART SPACE In Kolonaki, with constructions of mixed technique and assemblages. ·

2013-2014: participation in the group art exhibition at the "European Centre for Architecture Art Design and Urban Studies", in the centre of Athens. ·

From April 2014 until today, my works are presented in the new Web gallery DL Fine Arts gallery, by Dimitra Limniatis (archaeologist, art historian and curator of art exhibitions) 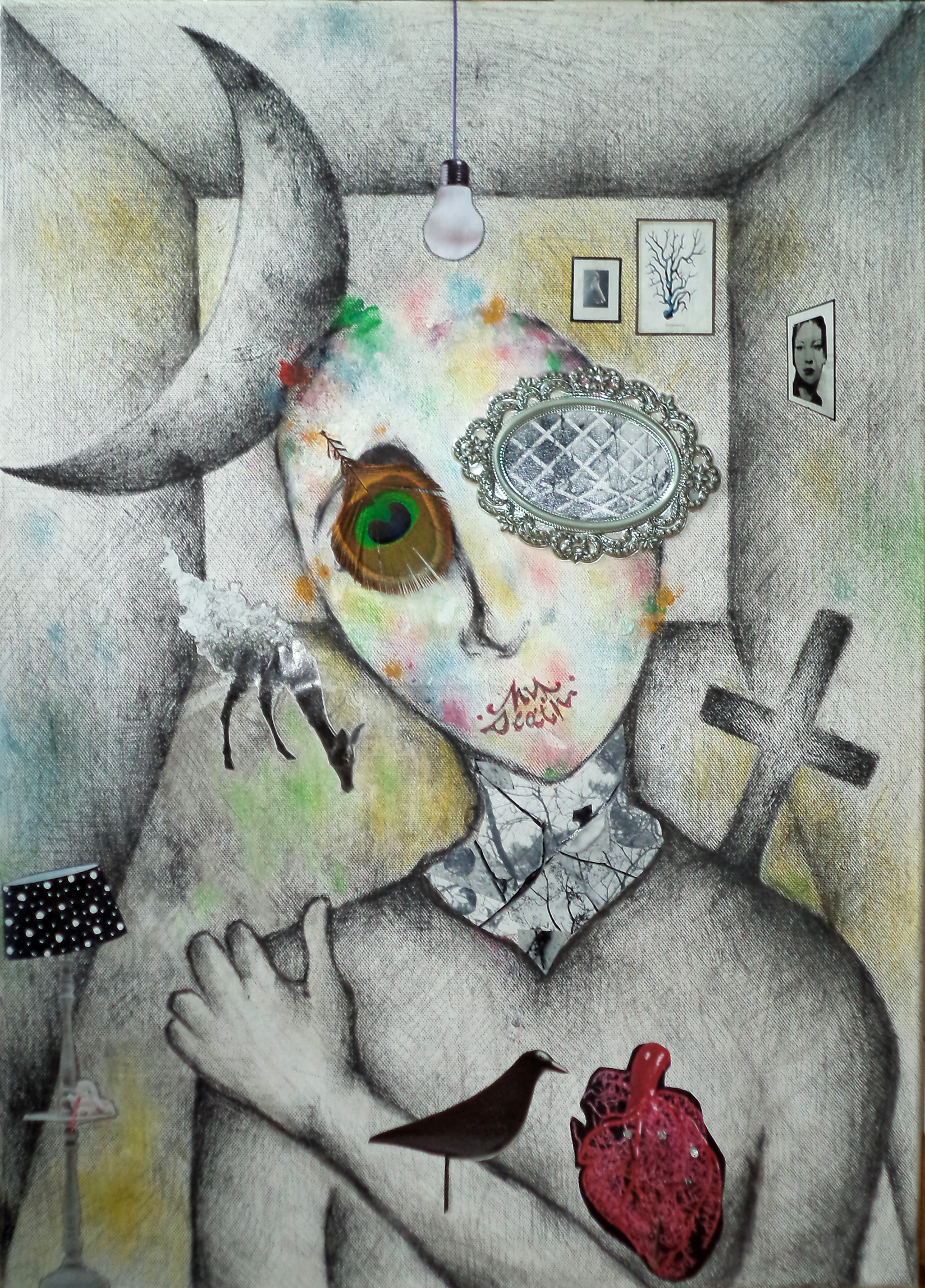 My Death, 2015, 0.50 m. (width) x 0.70 m. (height), (plastic, acrylic, charcoal, paper, peacock feather, nails, photos and colored pencils on canvas) - mixed technique.
’ Now that it’s getting dark, I enjoy sitting in my room. There is a darkness that spreads all over. I turn on the light but nothing changes .

The lamp flickers and the woman on the frame, winks at me.

I feel my head heavy tonight, the moon doesn’t leave me alone and it's huge.

A peacock is running around, I pull out a feather and wear it. I stick it in my eye. ‘’ 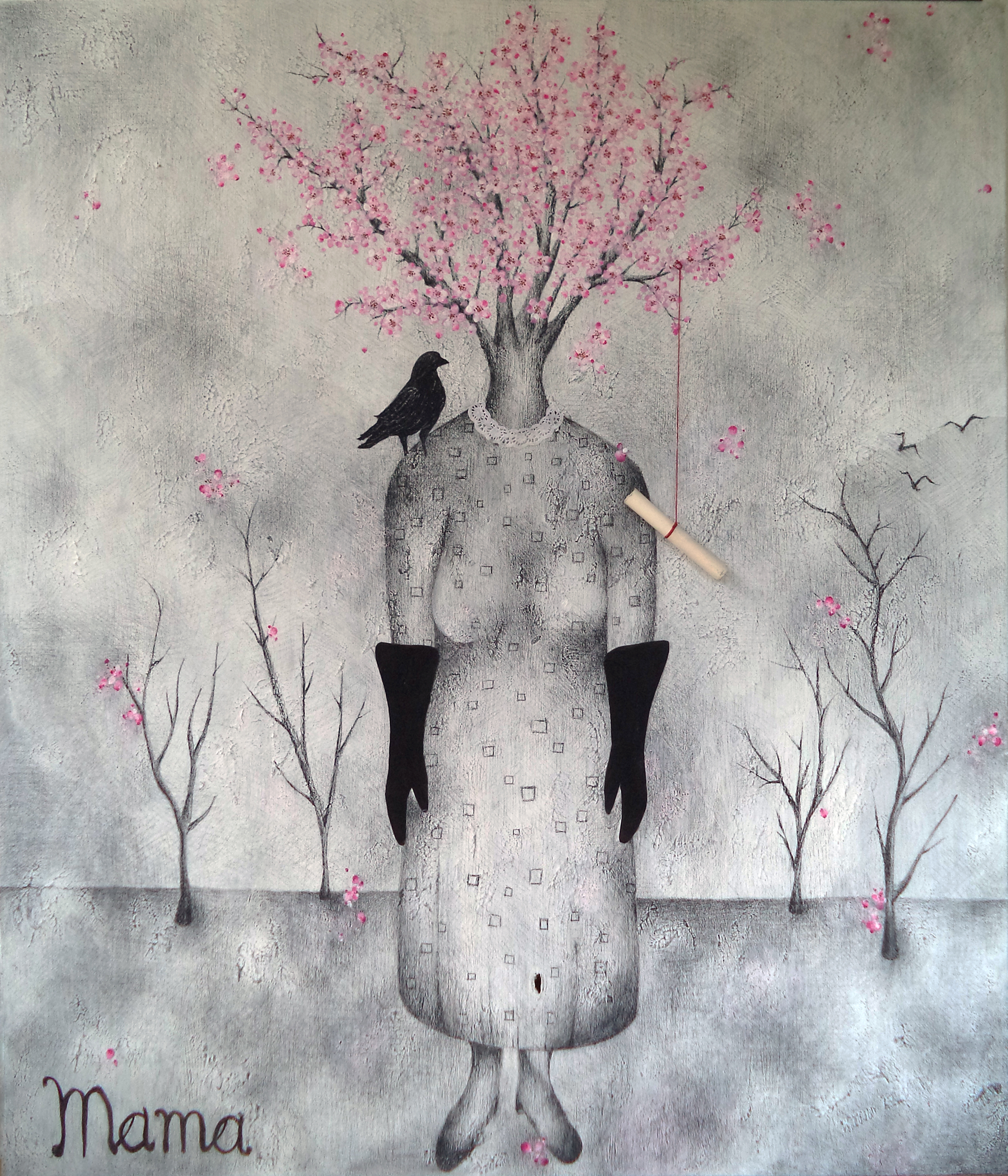 ‘’ You are in the garden. Your trees are waiting for you.
You wear your black sadistic gloves, you're the gardener, as you were always.
You wear your old dress. It has a hole in it.
This black hole is my soul. ‘’ 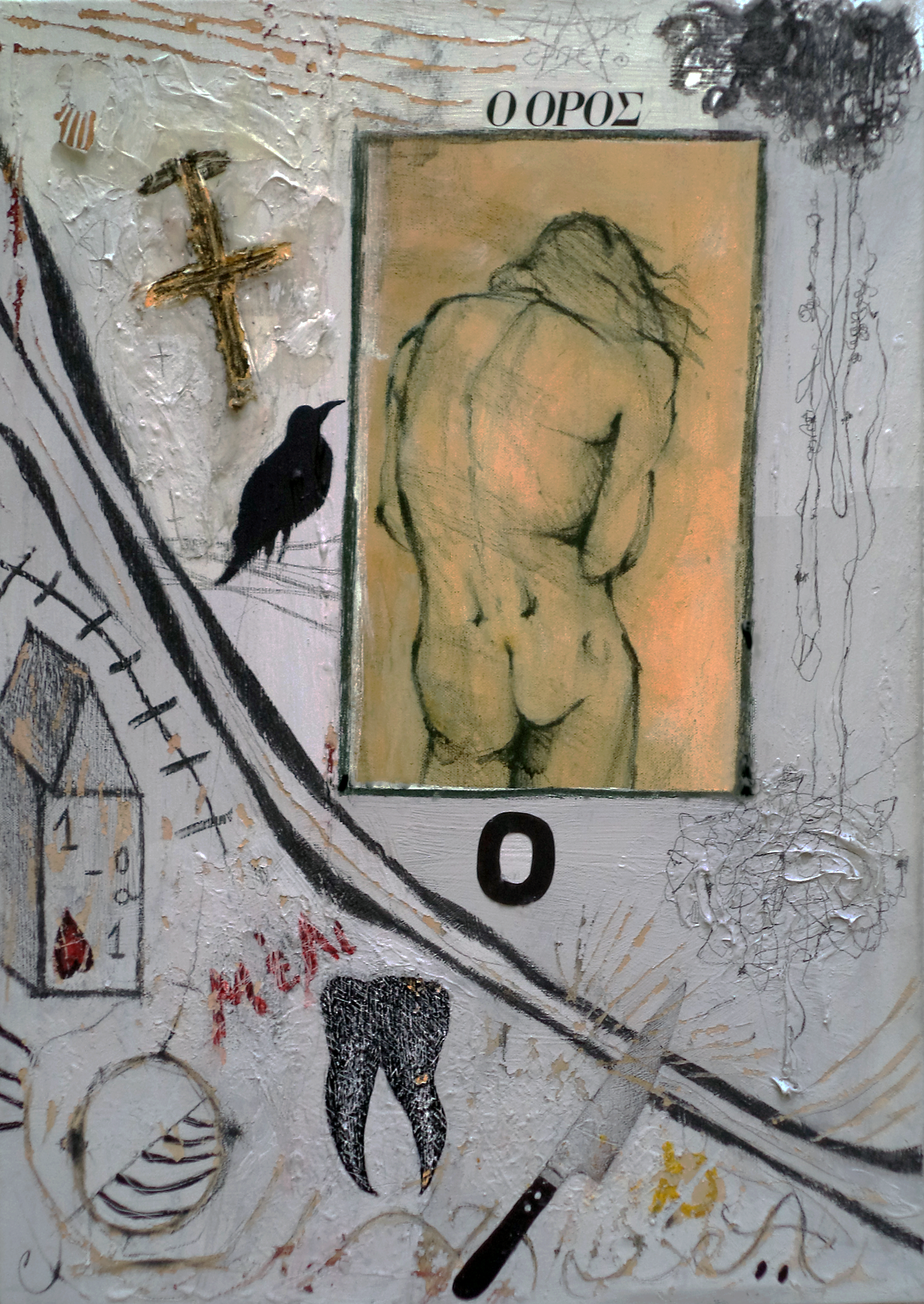 ‘’ Oh! this eternal race…You eat and eat all this honey and blood for years now, your canine tooth grows and falls, the knife you slaughter yourself, within, flows.
You are the fallen, you are the angel.
Who were you before and who will you be? ‘’