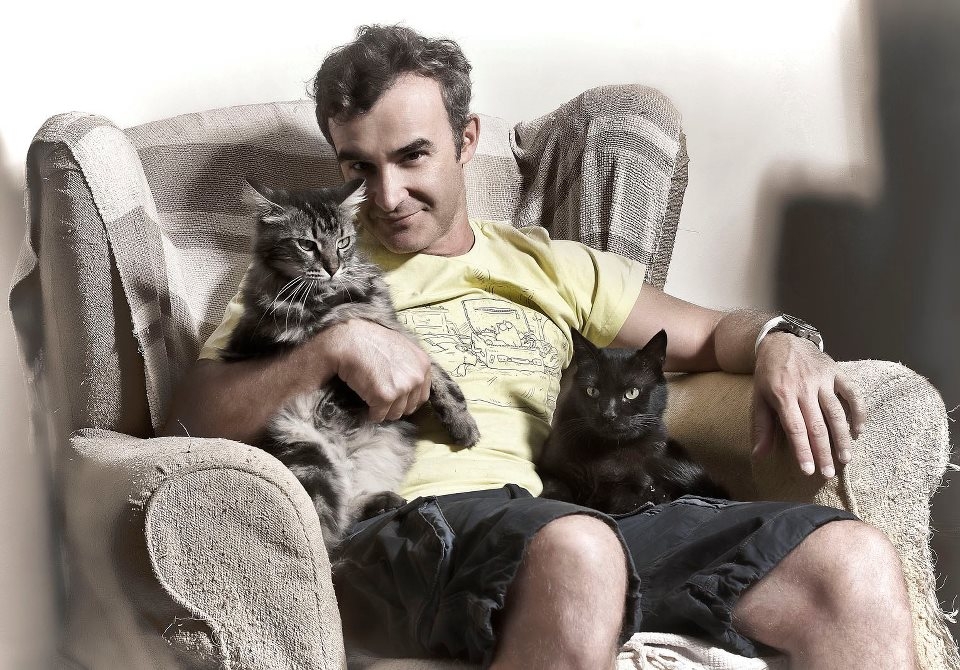 1.You are one of the most talented actors in Greece. How crisis changed the way you work today? Some actors claim that crisis gave an end to the fake lifestyle, so now they can really ''act'' and people will know the difference between a real artist and a person that  ''plays'' just for the glory.

Thank you very much for your kindness. I always try to do my best, whether I am paid good or bad. I have never tasted the so called “lifestyle”. From time to time, when some good payments arrived at my door, I bought a pair of shoes a little bit more expensive, or an extra gadget, but nothing more than this. My money, except from taxes, my rent and food, were always spent on cds, records & books. I live among thousands of them. That is my real fortune. Full of music and knowledge. As for the “real” acting, all these things make me laugh. You don’t need to be poor to be genuine as an artist. An actor is acting in an interesting way or in a boring one. And also, if you don’t give a damn thing about the world around you, you’re gonna act shitty anyway.  I believe that.

2.Is there a role ''you would die for'' ? A play you would like to be part of it, because it would drive you beyond your own ''limits''?

Well, the best characters in theatre have been played by very talented actors, some of them happen to be my friends. I am very happy for them. I do not envy them in any case. I am fond of the real people. I would die for a historical play, with existed characters, such as Giorgos Zambetas, the famous  Greek composer, or Aris Velouhiotis, the leader of the guerrilla army in Greece during the German invasion in the second world war. Or, even better, I would die if I was to become Nikos Kazantzakis, my favourite writer. I love real life, it inspires me, and because I have studied psychology, human motives and their results attract me more than you can imagine.
As a dream now, I would love to play in a sci-fi movie. Space is the ultimate frontier, as they were saying in Star Treck. I would love to act on a spaceship in another planet!

3.What is Greece to you? Is only the sea, the sun, the food, or something bigger than that?

Greece is an ideology and a feeling. It is a way of thinking which says: Love your country and make it better for the future generations. Learn your history and be taught by it. Look always ahead, don’ live in the past. Speak your language good, since it is our ark through time. Enjoy life with open mind.  Take care of everything beautiful around you. Do not be afraid of the difference that you meet in the world. Travel and be inspired by the people you meet. Smell the spring air and the Greek summer. Let your heart fly above the waves and die with dignity. In a strange way, all great people of history, were “Greeks” in their life, in the way I just described.

4.A classical question, which i cant help to ask..''Drama or comedy"?
What suits you more?

You know I have a personal small theory: there are the actors who can play comedy and the others who cannot, haha! Comedy is soo difficult. You have to make people laugh, whatever it takes! In drama, you just tell the story and that’s enough. Comedy is not just the lines or the script. Is what the script inspires you to do, to make life seem amusing and lighter for the people who have their own problems. I prefer both, because most of all I love a good story, comedy or drama.

5.A good actor can also direct a movie, or a play? Or there are two different things?

The movie director is a whole different profession. I have watched thousands of movies, I love cinema, but to direct a movie means to study the technical side of this job, to know the lenses, the cameras, to be able to guide the lighting director, the cameramen, the editor or the sound designer, it is a load of studies that I do not intend to make.
I can much more easier direct a theatrical play. I have done it from time to time. This year I did my third professional theatre direction. Theatre is much more naïve as an art form. It is made of wood, paper, some lights and a couple of good actors, pure artistry. Plus a good sense of handling people’s emotions. I am good at that. After 25 years playing and watching other directors and studying, I tested myself as a theatre director successfully.

6.Do you think there's light in the end of the tunnel for Greece?

Of course, there is always a light. The question is how long the tunnel is! haha! And I think, that some Greeks do not want to walk out of the tunnel, also! Faith in your talents and hard work makes you overcome all tunnels, no matter how long and dark they are. It is in human nature to solve all problems and survive after all. We must reinvent ourselves. Create the future. You know, a lot of people say, why work hard for the future, since there is a great possibility, not to be alive when it will arrive. I say, working for a better future, without all the disfunctions in our society that we had, is what make the present even better, with a true meaning.

7.A place you would propose us for great Greek winter holidays, a restaurant you love, your favorite island?

Winter in Greece is something else. We are famous for our islands, but the Greek mountains are spectacular. I would suggest Evritania and the city of Karpenissi. A beautiful area, full of green mountains, beautiful villages and great taverns. You can walk through the woods, feel the rain and the snow, relax near a fireplace, enjoy ski in the snow centre and see a different Greece.
My favourite restaurant is one near my house, called Prosopa, which means “faces”. It has tasty plates, mediterranean menu and great service. I love it because I feel very cosy there. I can go directly after a performance wearing athletic trousers or dressed in a costume on a special occasion.
My island is and will always be Crete. The island of my grandfather, the most beautiful place on earth for me. I acted in a promotional video for Crete last year with great pleasure!

Oh, they are so many: my wife and our life together, my two male cats, the most goodhearted animals I have met, the books that opened my mind, my favourite records that helped me in my life, the great people I have met, the swimming in the summer, the sunset time in my granfather’s village, resting on my couch with a glass of wine watching a good movie or tv series  after a hard working day, the food I put and the water in a small bowl for the tomcats or the street dogs of my neighbourhood.

9.Whats the biggest problem in Greece today by your opinion?

A lot of people in Greece believe that the world owes us because we created the basis for western civilisation in ancient times.  That makes a big part of Greek society to look much more in the past, than in the future. I believe that we must stand again on our feet and prove our value to the world. I need to be proud for my country’s present, not only for her past.

10.Your secret favorite spots of the city you live...?

I love Piraeus’ port. I grew up to a neighbourhood very close to it and I like the smell of the boats and the big ships. I love watching them sail and entering the port, especially during summertime. It reminds me that a whole wonderful world is always beyond the sea.