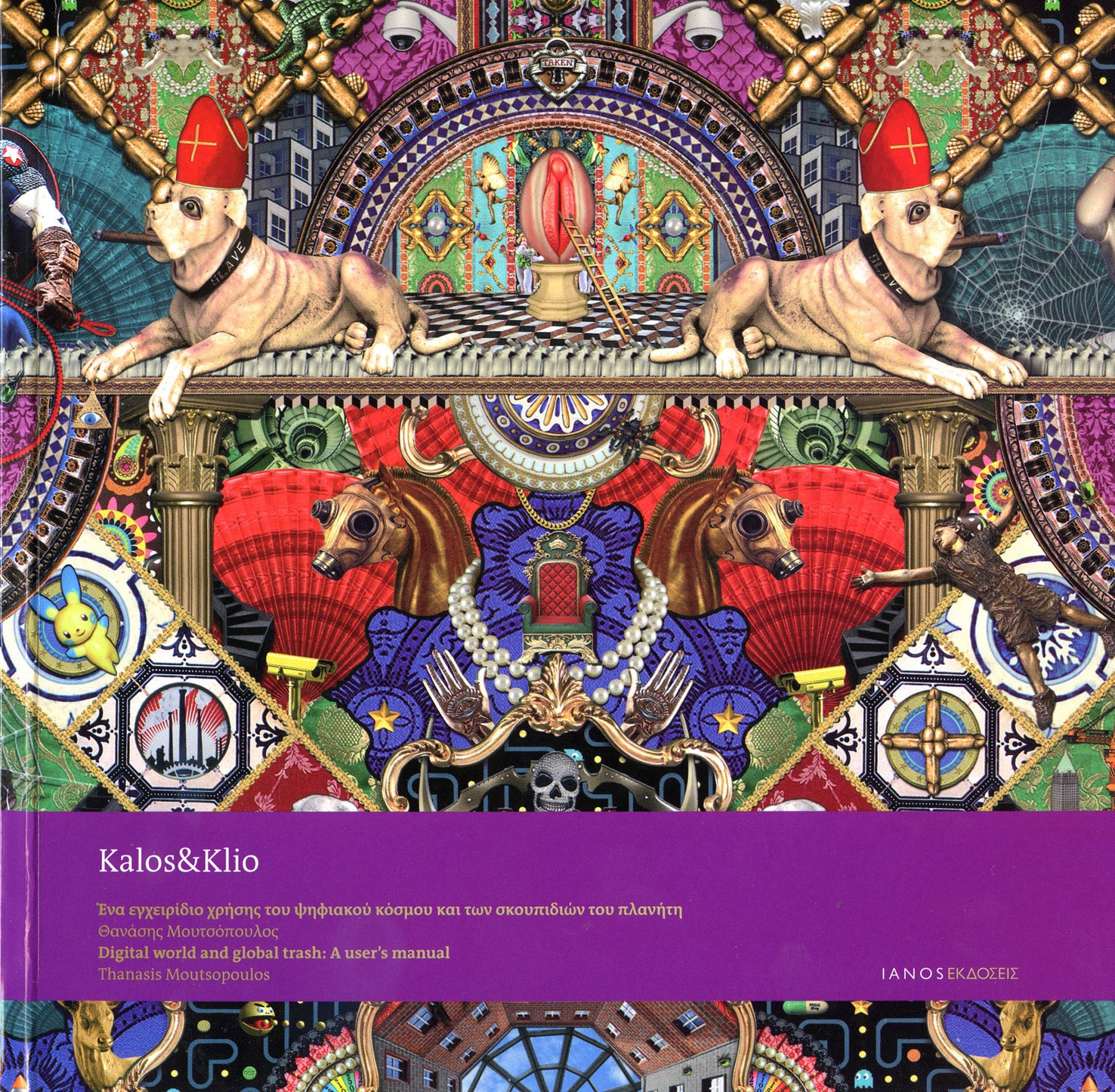 “Kalos&Klio are Interdisciplinary artists working in a variety of media incorporating installation, digital graphics and design.  They are crossing the boundaries of the high and low arts as they choose to think across them. Through their post pop and post psychedelic explorations they seek to open up new avenues in the world of digital art. They are breaking through the boundaries of the arts as they create ensembles which are deliberately emptied of ideology and which, for precisely this reason, articulate a political discourse. They are intentionally artists of the ‘post’ and the ‘intermediate’, their work is based in post pop and post psychedelic art with steampunk characteristics.
The artistic pair is not indifferent to the fragmented world from which their works are inspired and influenced. They scan the virtual cyberspace as well as the (unquestionably material) world of global flea markets, as they look for raw materials for their creations. The final work is then presented as a single artwork print or as an installation that is realized on a variety of printed surfaces: wallpaper, fabric, garments, crockery and tiles creating environments that are intricate and complicated.  Artistically Kalos&Klio operate like ‘cultural nomads,’ like Flauners wandering casually in the imaginary of the internet screen among diverse cultures, including their own ‘home culture.
Their artworks such as the project series, Eudaimonia  2007 and  Virtual Vanitas 2011 as well as their project series in progress  Virtual Babylons 2012, emerge  from a  delirium of digital virtual appropriation an addictive compulsive procedure of a systematic order of actions a process which they call Digital Tank Appropriation. Kalos&Klio embark in an almost time machine journey and surf the search engines of the Net between the trivial and the precious, the obscene and the remarkable the essential and the random retrieving, collecting and manipulating large parts of diverse virtual elements that float and sink in the abyss of the Net screen.  These are the representations of images from the whole history of humanity, from different times, and from all the corners of the world where the signifier and the signified exchange roles and create new memories.
Kalos&Klio artworks in deeper level are concerned with what is – in appearances only – a research in vain: the exploration of our lost connection with the memory of the past, through reusing existing objects; the memory as historical past, or aura, but also the importance of memory as illusion in the internet, by means of a mélange of personal narratives, among which one can surf time and space, notions that have in present nothing to do with what we ve known.
About The Artists
Two People one Artist: Kalos&Klio
Artistic duet Kalos&Klio is a distinct artistic case. Above all they are an artistic duo, a particularly rare phenomenon in our intensively individualistic era.  The artist pair is born in Greece, where they live and work.  Kalos&Klio have joined forces since 2005 and operate in a complementary fashion; as they say: “we choose to work as a unit that operates with two hard disks “.  The pair considers the process of working as one, a path more intriguing since they come from different artistic trajectories. Kalos studied photography in GR and Klio studied painting and printmaking in the NL and USA and also holds an MFA , from the University of Chicago, USA. Kalos&Klio are emerging artists and have showed their work in exhibitions in Europe, Asia and America. In print:  By author Thanasis Moutsopoulos , (2011). Kalos&Klio, Digital world and global trash: A user’s manual.  Thessaloniki, Greece :  IANOS Publishers. www.http://www.ianos.gr