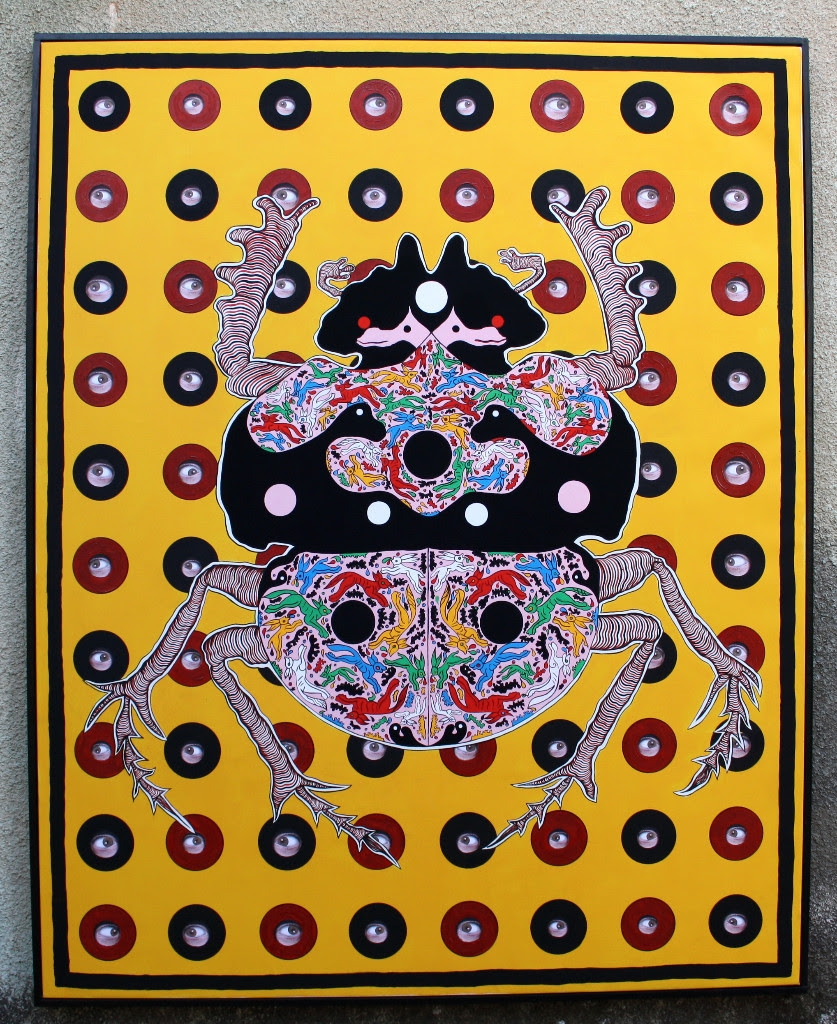 Dimitris Ntokos was born in 1984, in Athens, which he lives and works till nowadays.

He studied graphic design in AKTO, as well as architectural design, which he practiced for ten years.

He is self-taught and his work can be encountered in the streets of Athens, as he used to be a street artist. Since 2011 he has been presenting his work in various exhibitions.

The exhibitions are the following:

2012 Spirit Fermenting according to the circumstances, Potnia Thiron, Athens, Greece 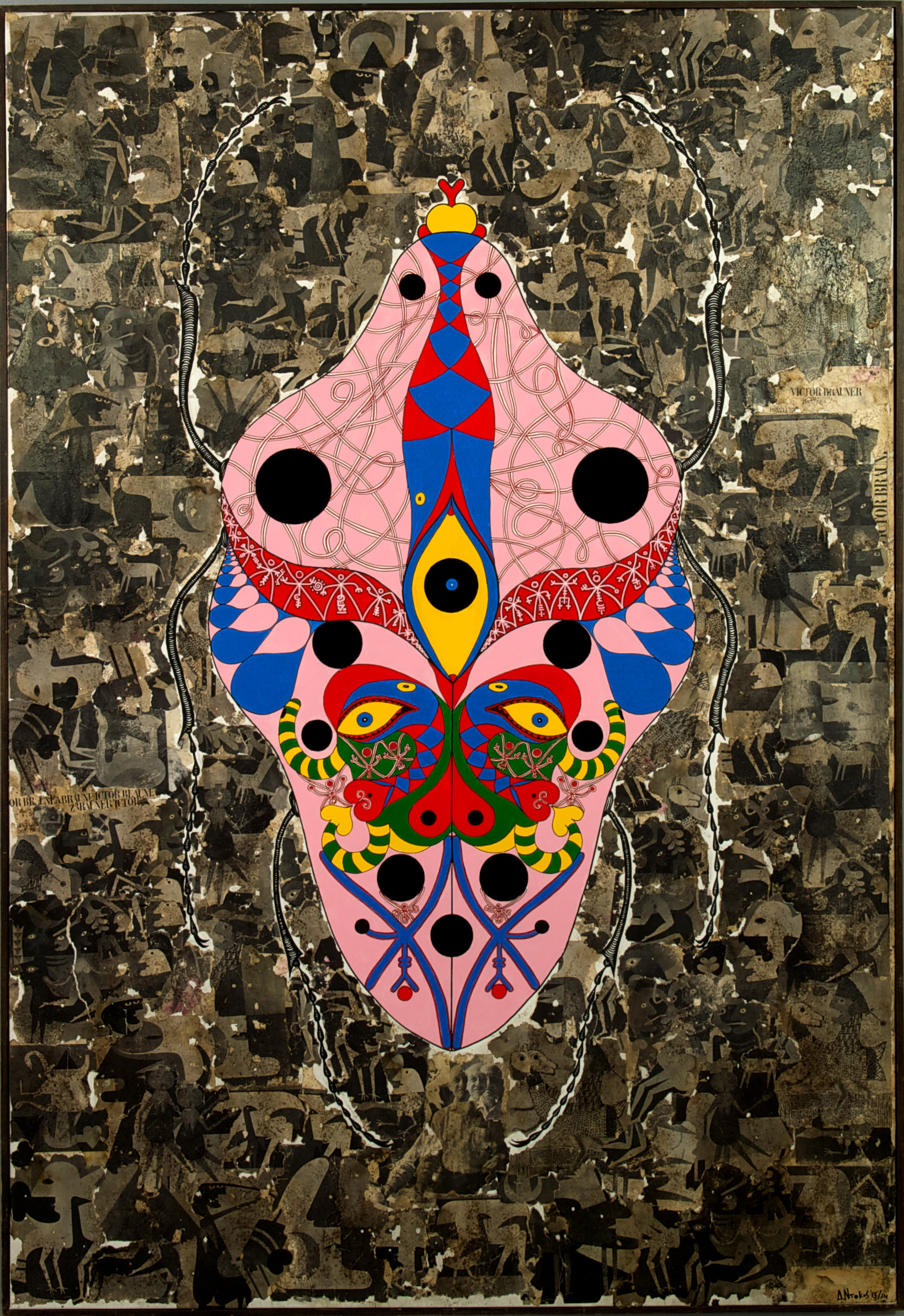 The Blender Gallery meets the K8 Art Point in the center of Athens!

On Wednesday the 16th of March, the Blender Gallery team will present selected pieces of artwork by Dimitris Ntokos, at K8 Point.

K8 Point is an all day & night entertainment venue, in the heart of Athens, combining a café, a bar, a restaurant, a live stage and an exhibition area under the same roof.

The Blender Gallery invites you to celebrate its successful collaboration with K8 Point. Discover the atmospheric scenery created by Dimitris Ntokos artwork, under the music selections of DJ George Papadelis.

Information about the Artist:

In  Ntokos’ work, the scarab seems to be a repetitive motif, often surrounded by elaborate ideograms, which the artist himself characterizes as diaries of his thoughts. The scarab, a symbol that is entirely connected to the Egyptian mythology, is sometimes used as a frame, from which maps, portraits and narrations emerge, while other times it is used as a skeleton upon which more abstract, but still symmetric and detailed compositions are made. The beetle is a characteristic symbol in Ntokos’ work; starting as an insignificant speck, it is gradually embellished through the technique of the artist. The form of the scarab acquires a more sophisticated form, as it is often presented in carved wooden frames, in which one would expect to see human portraits or the reflection of themselves in a golden-framed mirror. Perhaps the artist urges the viewer to exceed himself through the observation of what is found within the frame (a subject-matter that could have been the reflection of the viewer himself), confirming the meaning attached to the scarab in the Egyptian’s mythology: the idea of deep self-transformation, personal growth, fertility and ultimately the idea of creation. At an initial stage, the viewer is impressed by the multilayered technique and imaginary themes characterizing Ntokos’ work. Then the audience surrenders to the illusions which are created through the combination of different geometrical shapes, patterns, and vivid colors. A strong urban and surrealistic aesthetic remains a key element in the creations of Ntokos, even when his artwork is displayed in spaces unaffected by the hectic rhythms and noises of the city. His artworks are adapted to the frames, which he founds in flea markets, while he often incorporates in his work scraps and old metals found on the street, which in a way he “saves”, by adding a functional value to them. 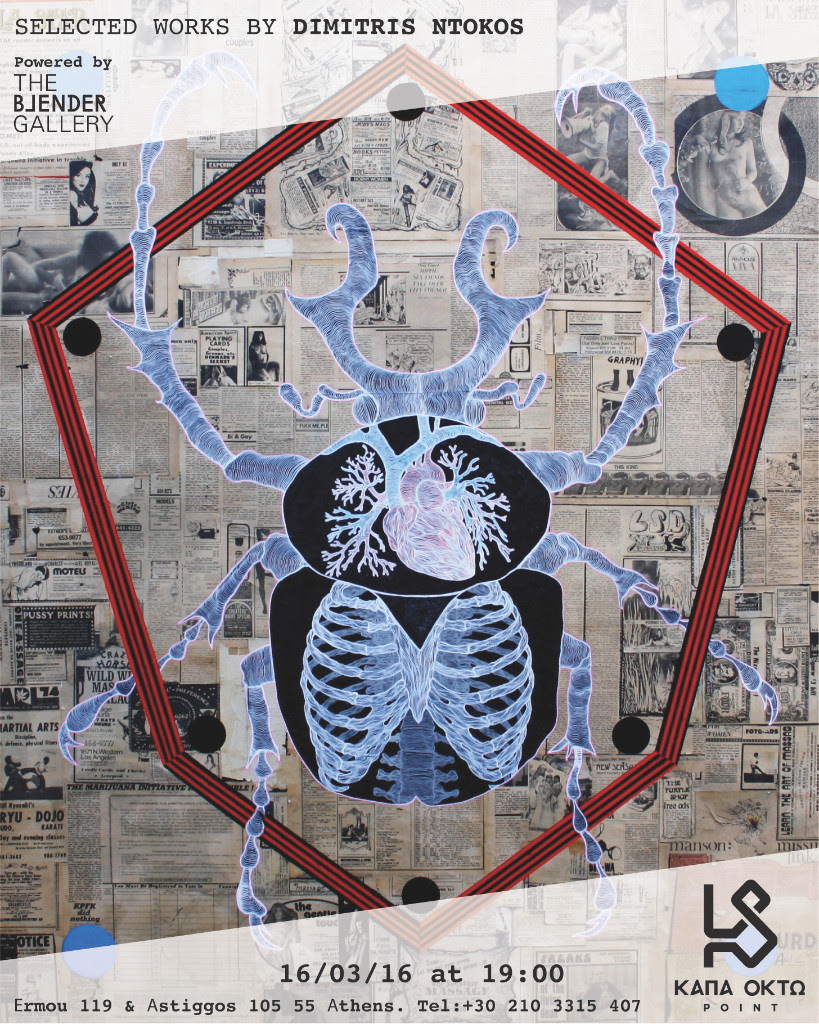