Skip to main content
ABOUT
Talking with Katerina Topouzoglou about ''All For Blue'' Organization.
Iliada Evangelia Kothra |
MEET THE GREEKS
| 4 March 2019
Tweet 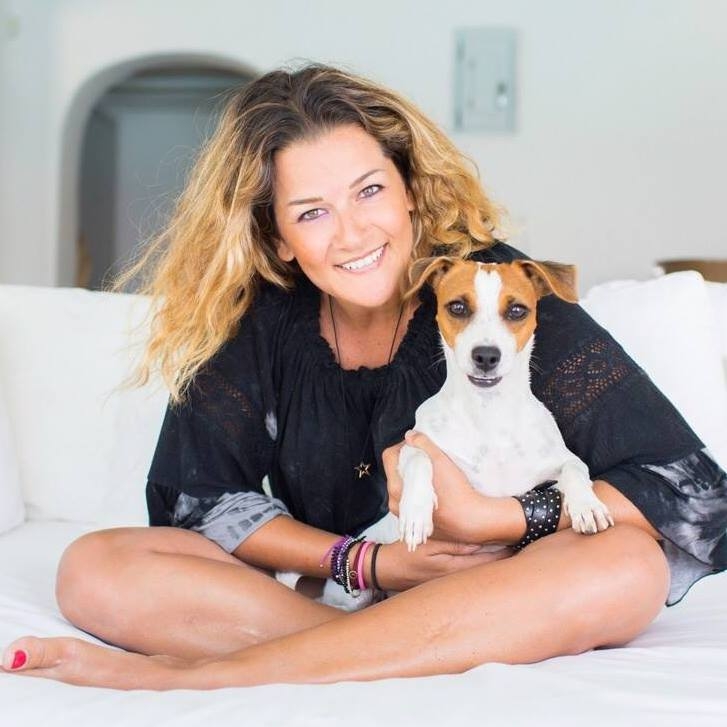 1. “Be the change you want to see in the world". I guess this is your own personal quote. What was your first concerns about the environment before ''All for Blue'’ organization?

-Only if you believe you can change the world, you have chances to actually change it! During childhood my mother always told me and my sister that we should remove trash from the beach. We did it every single time we went swimming, so it became second nature to us. Since I was a child I was an athlete: swimming, free-diving, scuba diving, spearfishing (which I gave up when I devoted my self to the conservation of the marine ecosystem), and now a world champion in Underwater Target Shooting...all my life I saw trash in the sea and I did whatever I could to remove it, trying to keep the ocean clean. But I could not be effective if I were alone. So, I founded All For Blue and as a result more and more people join our cause.

2. How difficult is to persuade people to be that ''change''?

-All you have to do is inspire people, show them that it can be done. They can choose to be the change they want to see in the world. I strongly believe you’re never too young to change the world! So, now I put the emphasis on children. All For Blue in cooperation with schools, municipalities, private institutions etc organizes educational seminars for children about the ocean conservation and shark awareness. We teach children the importance of protecting our seas through fun activities. At the same time, we change their views about sharks, explaining that they are the most misunderstood creatures. As a trained shark handler who swims with sharks around the world and participates in research programs, I can tell you that they are of major importance for the balance of the marine ecosystem. Sharks are the official cleaners of the marine environment because they are mainly fed with garbage and sick or weak fish. After attending the seminar, children know much more about the underwater world. We inspire them to take action. Both children and adults participate in underwater and beach cleanups with enthusiasm.
All For Blue has removed 182 tons of trash with the help of thousands of volunteers! When you follow your dream, people get inspired and follow you!
Every day, we become stronger with the support of people who share our values and participate in All For Blue’s mission. Don’t forget... “People who are crazy enough to think they can change the world, are the ones who do”.

-I believe there is no box, so there is no limit to what you can do. I ignore the “box” and believe in dreams and possibilities. I go after my dreams and my dreams worth going beyond the limits, going outside my comfort zone...and that’s when magic happens and your dreams become reality.

4. Are you the type of character who would swim against the stream or would you rather be on the safe side?

I could be the “definition” of a person that swims against the stream. Don’t forget that I love swimming with sharks, I never believed what people said about them. I had to see for my self. So I ignored the “safe side” and dived into knowledge combined with adventure and that’s how I found out that they are definitely the most misunderstood creatures. I’m a Shark Aware Instructor, recognized by Project Aware and I participate in shark research programs around the world.
For me safe is boring. I had a career as a model, a crowned beauty queen, a TV presenter, but I decided to give it all up to follow my dream.

5. What have been your learning milestones starting ''All For Blue''?

-I learned that when you really believe in your dream, you can make it come true, even if in the beginning you lack the funding. All For Blue is a non-profit organization, 100% funded by donations, sales of our products and our educational seminars. Until now we have removed 182 tonnes of trash, we have done hundreds of seminars and we have participated in research programs around the world for the protection of the ecosystem. So, I learned that dreams can come true!

6. Do you agree that today's children are more aware of issues that have to do with the environment?

-Definitely yes! In the seminars All For Blue does at schools around the world we realize how well informed children are about environment protection and preservation. Children are thirsty for more knowledge. I wish you could see the excitement in their eyes when they hear new things about sea life, sharks, dolphins, turtles, plastic in the oceans, ways to save the marine ecosystem. Each time I show All For Blue’s reusable stainless steel straws and explain that by saying “No plastic straw please” they will reduce the trash in the oceans and save marine creatures, children get excited! Their response to learning new things is wonderful. That’s why I love doing seminars at schools.

7. ''Shark awareness''. I have to admit that I totally respect them. I guess you fight hard against the stereotypes for those creatures.

-Sharks are totally misunderstood. The film Jaws was...imprinted in the minds and hearts of generations. I want to set the record straight. Sharks are extremely valuable to the health of oceans. So here are a few facts about sharks:
There are more than 400 shark species, not all sharks are large, nor are they all carnivores. Sharks are peaky eaters and they don’t find humans tasty at all! We are not in their menu! They love the smell of fish and seals and they are usually consuming sick or weak creatures, thus cleaning the oceans. Only 8-12 people die from shark attacks per year around the world and usually, they are caused because a shark feels threatened (or out of curiosity with surfers) People have better odds of dying from lightning than a shark attack.
Sharks have more senses than us. One of them is the sensing of electromagnetic fields. They navigate using mental maps and have an amazing memory
Sharks have been to predators in the sea for more than 450 million years (200 million years before dinosaurs). They are amazing hunters but have not developed defense mechanisms.
More than 100 million sharks are killed every year... They are a species in danger of going extinct. I love participating in scientific programs on sharks around the world. I’ve been freediving with many different species of sharks. I have seen a group of sharks sleeping in Socorro islands, hugging each other. While my teacher Cristina Zenato ("the shark dentist") was training me in the technique of tonic immobility I saw sharks standing still and letting us remove hooks from their mouths. What you experience when you swim with sharks is totally different from the misconceptions people have.

-I am sure our organization will keep growing. The more we are, the stronger we become.
Together with the Region of South Aegean, we have organized the biggest campaign ever done in Greece for underwater and beach cleanups, "Keep Aegean Blue". With the participation of thousands of volunteers, we once again combined ecological action with adventure for the preservation of our seas. We have already removed 5,5 tonnes of trash, more than 5,000 pupils took part in our seminars and the campaign is still on!
Our supporters are our strength. They are the ones who guarantee that All For Blue will keep on doing more seminars, more underwater and beach cleanups.

All together we can make the change. Are you with us? 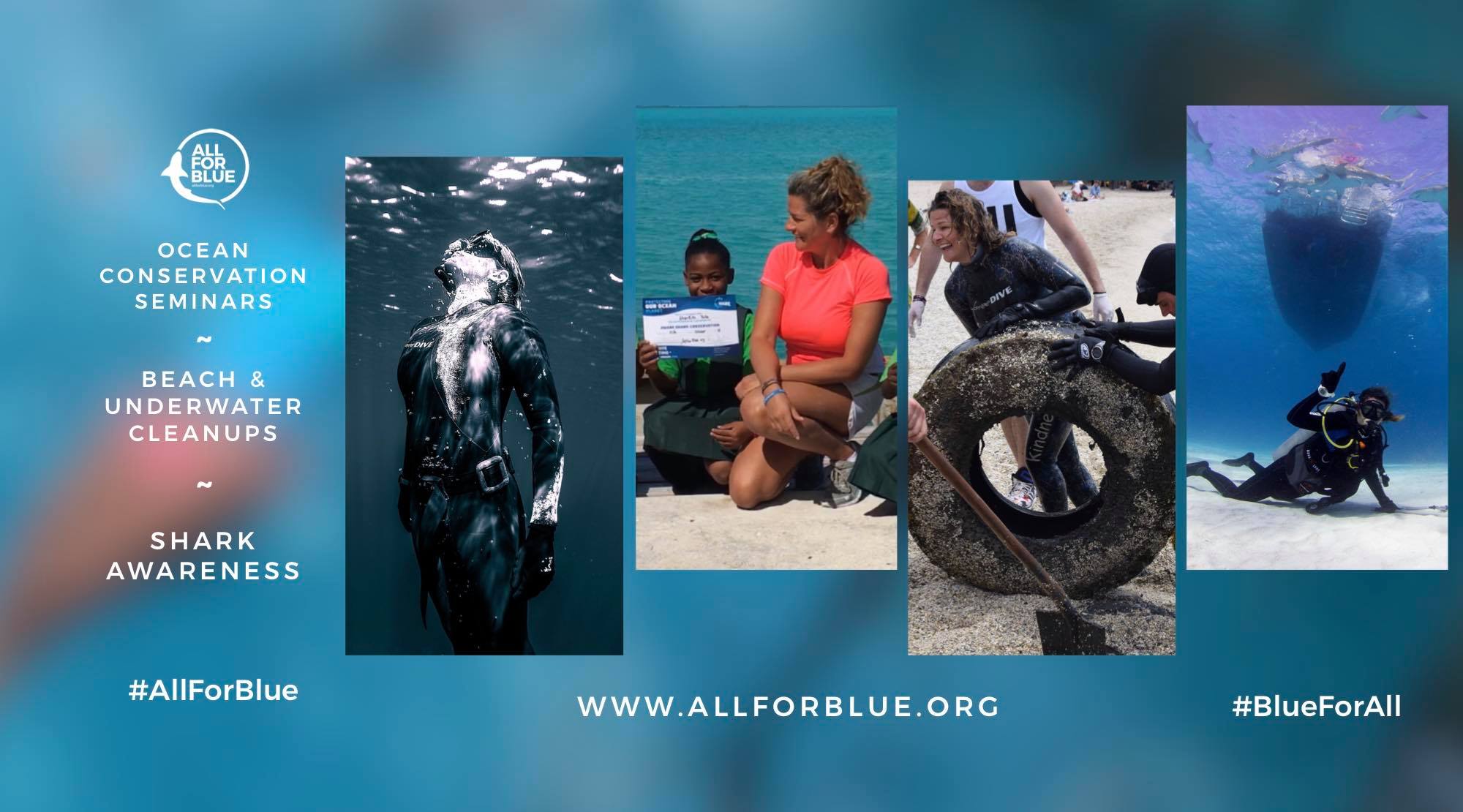