A musical performance dedicated to the memory of Melina Mercouri with the actress-singer Tina Alexopoulou.

1 Why a music play about Melina Mercouri? What’s magical about this

-Well it isn’t exactly a music play. It is a tribute-musical performance to honour Melina’s memory on the occasion of the 20th anniversary of her death in Paris. We will perform famous songs of Melina’s repertoire. I will be accompanied by three excellent instrumentalists: at the piano, Benjamin Chatzikoubaroglou, accordion, Louis Paralis, and bouzouki, mandolin, and guitar, Periklis Malakates. In addition, through videos and small stories (which I will narrate), the audience will have the chance to rediscover her life and career. Melina was a great personality who had the talent to inspire people. We need this inspiration more than ever.

2 Was it difficult to enter her soul, understand her points of view, her character?

-Not at all. Melina was like an open book. She even wrote her autobiography ‘I was born Greek’. She had nothing to hide. She shared it all with the people, the good and the bad moments. And the way it is written it is as if you are chatting with her over coffee - you can almost hear her voice. I love the way she describes herself at the beginning of the book: ‘I will not write with humility or prejudice, because I am neither humble nor cautious. Though one moment it seems I'm a sheer hédonist, and other time Joan of Arc: it's because I'm both a hédonist and Joan of Arc’.

3 After Paris... your next destinations will be where?

-We are planning to make a tour in France and Europe. Also, during summer, we are going to perform at several festivals throughout Greece. Long-term, the ideal would be to travel to distant countries for Greeks abroad, such as Australia, Canada and the USA. I think they would embrace our show because it brings strong images of Greece.

4 What’s the message you want to send by this performance?

-This performance is not only about the songs which made a huge success from the movies, but also, through small video-documentaries and her songs of the 70s, we remember her political struggle against the Greek dictatorship. For me, this is the most important part. She reminds us that that we have to fight for injustice and for our rights.

5 What is Greece to you?

-Greece is love. I think that I couldn’t live away from Greece. I was lucky to be born and raised on the beautiful island of Samos and I cannot imagine being far away from the sea. Melina felt the same way when she was in exile. She would come in summer to the coast of Turkey and watch the Greek islands in the distance. She was waiting for the boats from Samos to come, and then Greek tourists used to recognise her and talk to her, and she felt like she was at home. I would do the same if I was ever in her place. For the record, this story became a song, ‘Les bateaux de Samos’, which Melina sang and which became a very big hit in France. The music is by Yiannis Spanos and the lyrics are by Maurice Fanon.

6 Five things of Greece you can’t live without...?

7 Are you an optimist? Do you think we will see the light in the end of the tunnel?

-I am an optimist even though being an artist during the crisis is the hardest thing to do. But we have to stay positive and fight for our dreams. Reality strikes back and some times really hard, but that’s life… A constant battle and we’ve got to stay strong.

8 The next role you would like to be given?

-I would like to make clear that I’m not playing a role. I’m not a re-incarnation of Melina. I’m just a performer who sings Melina’s songs. She was a unique personality. I’m not trying to imitate her in any way. I’m just the voice, the medium for the songs to be heard. It’s a tribute to honour her memory, and it is made with a great deal of love and respect for her. As for role, I would like to participate in a musical.

9 Do you think the fight of Melina's about the marbles will end one day with success?

-I was lucky to have an interview with Spyros Mercouris, Melina’s brother who continues her vision. He said ‘We fight for the return of the marbles because we believe in it. I am optimistic. It has to be done. I don’t know when, but it has to be done. Because as Melina used to say, the Parthenon Marbles are our pride. They are our identity. They are today’s link with Greek excellence. They are creations synonymous with the concepts of democracy and freedom.’ I couldn’t agree more…

10 Tell us more about the people, your team, who helped you in their own way.

-The base is my family. My parents Vasilis and Philitsa, who always stand by me. My brother, Christos – who is a musician, too, and founder of the label ‘Puzzlemusik’ - helps me a lot with his advice.

A very important part has been played by the producer of this project, the French musician, Pierre Maraval. We met on Kos in 2012, when he was on vacation with his wife. I was singing at the piano bar of the Neptune Hotels. They came ten nights in a row. There he had the idea of a tribute for Melina’s memory, and now with the help of Martine Bouhier – his wife, who is co-producer – the tribute is finally coming true. Agata Darlasi has also contributed a lot by directing both the promotional video clip and the performance .Also in my team is Mary Mouzaki, my French teacher, and my dear friend Leslie Woodcock, who helps me with the English translations. The core of my team are my close friends who support me and come to my shows all the time, especially the members of the theatrical group ‘Kalidoskopio’ of the Cultural Association ‘ILISOS’, whom I have the pleasure to teach drama. In general, I feel very blessed to be surrounded by people who support me all these years and help me evolve, each one in his own way. I thank them all. 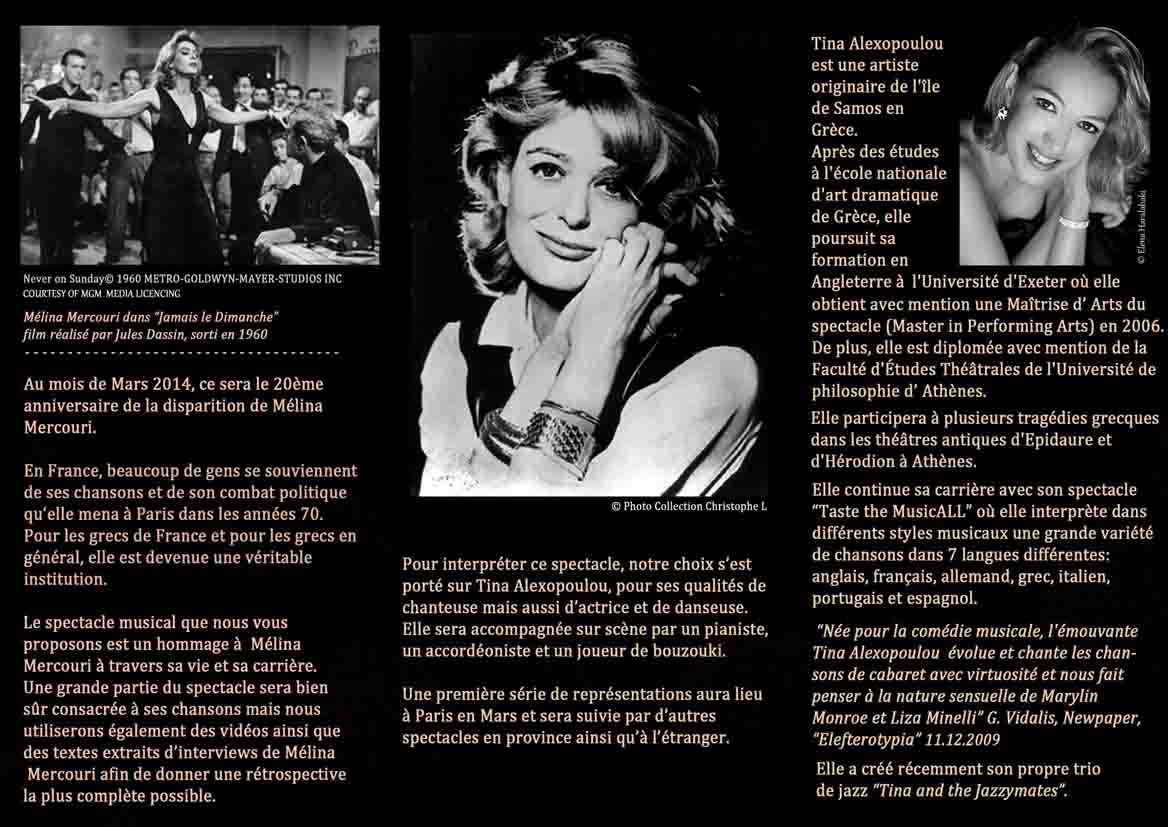 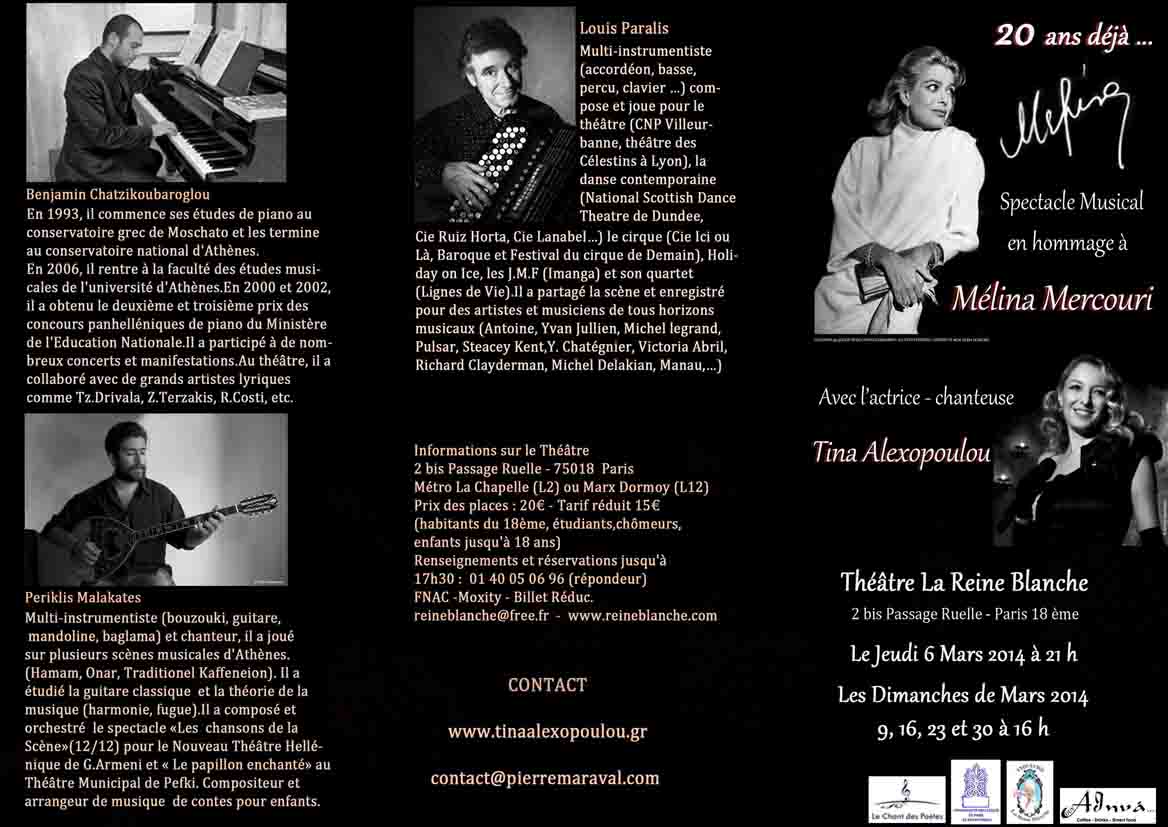 We all remember the personality of the great actress Melina Mercouri and the political struggle she led in the 1970s in Paris. On the 20th anniversary of her death, a tribute-musical performance in Paris is dedicated to her memory. Through her songs and videos, audiences will rediscover her life and career. The actress and singer Tina Alexopoulou will perform famous songs of Melina’s repertoire and she will be accompanied by three instrumentalists (piano, accordion, and bouzouki).

Performances will occur at the theatre ‘La Reine Blanche’, Paris, on Thursday, March the 6th – the exact day of the anniversary - at 21:00 and also on Sundays, March 9th, 16th, 23rd, and 30th at 16:00.   The official announcement of the theatre will be through the link below:

We hope to see you there!